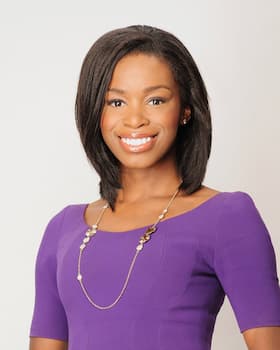 Janelle Burrell is a famous American journalist. Currently, she is working in Philadelphia, where she anchors at Noon alongside Jin Donovan the Eyewitness News This Morning, and Eyewitness News.  Since April 16, 2019, she has been part of the new family.

Janelle was born and raised to her loving parents, Lloyd G. Burrell Jr.(father) and Yhavier M. Burrell(mother) in Brooklyn, New York, the United States. Her father is a mechanical engineer while her mother is a nurse. It is not well known if she has siblings or not.

Janelle is a married woman to her handsome and hardworking husband Derricke Dennis. The adorable couple tied their knot in 2015. Derrick is presently based in New York, where he works at Fox News Headlines 24/7as the national morning radio news anchor.

Janelle graduated from a local high school and later joined Penn State University. Janelle worked at WPSU-TV as an intern. Later on, she enrolled and graduated with her master’s degree in Broadcast Journalism from the  University of Columbia– Graduate School of Journalism.

Janelle receives an annual average salary of $96,852. This is according to CBS News anchors/reporters’ salaries.

Janelle has an estimated average net worth of $1 Million- $ 5 Million.

On April 16, 2019Janelle officially joined her current station KYW-TV, where she replaced news anchor Rachel Solomon. Currently, she works on this Morning and Eyewitness News at Noon alongside Jim Donovan as an anchor.

Before KYW-TV, Janelle worked at WCBS-TV in New York as a general assignment reporter. She worked for six years, that was from 2013 to 2019 at the station. She also worked at WCBS-TV, where she did coverage of major events such as the 2014 Super Bowl, the Pope’s visit to New York, and the terrorist truck attack on Manhattan’s West Side.