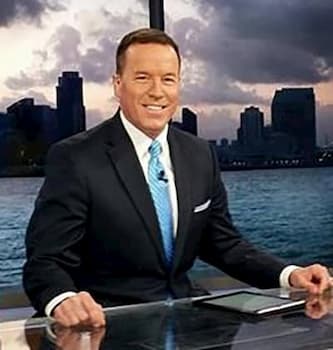 Jason Austell is a famous American journalist. Presently, he serves at KUSI 2 since April 2017 as a Good Morning San Diego Weekend Anchor. Before, he served at KNSD/NBC 7. Before that, Jason joined XETV-TV/Channel 6 in July 2016 working as the weekday evening anchor.

Jason was born and brought up by his father and mother in the United States. He has not mentioned his parents and siblings’ whereabouts but the information will be updated as soon as possible.

Jason is a married man to his loving and caring wife Moji Austell. The couple is blessed with their adorable daughter named, Neela. Jason and his family live in La Jolla, where his wife Moji owns a Pilates studio for several years.

Jason studied and graduated in 1984 from Escondido High School in San Pasqual. Later on, he attended Palomar College and graduated with a bachelor’s degree in broadcast journalism.

Jason receives an annual average salary of $73,561. This is according to KUSI News anchors/reporters’ salaries.

In the early 1990s, Jason got his start in his broadcasting career in San Diego. He served for local radio stations as a traffic reporter, he would fly over San Diego freeways during the morning as well as afternoon drive times.

He served in 1997 as the reporter and photographer onboard San Diego’s first news helicopter to be equipped with a gyro-stabilized camera. For ten years, Jason was the “point man” for traffic and breaking news. He reported brush and structure fires, rescues, and high-speed car chases, he covered them all.